In 2018, the world resumed its collective freak out—but no one knows exactly why. Here are some reads to help you understand what's going on.

If you aren’t freaking out about something these days, then… well, then I’m freaking out that you’re not freaking out. Tell the rest of us: what’s your secret? Because the rest of us are pretty sure the world is going to hell in a flaming handbasket. And not only do we not know why, but we don’t know what to do.

We live in a strange and contradictory time. On the one hand, the economies of the world are doing great! On the other, unless you’re wearing $2,000 Prada shoes and brush your teeth with truffle toothpaste, you’re not benefiting much from that growth. On the one hand, there’s less war than ever before. On the other, pretty much everyone seems to hate their own government and is actively working towards their own demise.

So, what the hell is going on? Well, I spent most of my reading time in 2018 trying to figure that out. And here are five of the best explanations I’ve come across:

Democracy for Realists
by Christopher Achens and Larry Bartels The Elevator Summary: Democracy for Realists is an eye-opening and sober look at the data on democracy and what makes it effective/ineffective. Hint: people are stupid. Or as my favorite Winston Churchill quotes goes: “The best argument against democracy is a five-minute conversation with the average voter.”

Its Explanation for the World Being Fucked: We romanticize democracy. We like to blame politicians and bureaucrats and argue that if the people were just more engaged, more educated, had more direct say in their government, things would be better. Unfortunately, the data show pretty much all of this to be untrue. People regularly vote against their own interests, are ignorant of the issues, and even when they are well-informed, they are easily swayed by group identities and emotion. Yes, that includes me and you.

The best-functioning democracies are those that have large hierarchies built into them separating power from the popular vote. Unfortunately, due to technology and political pressure, those hierarchies have been slowly dismantled over the last 100 years or so. The book is heavily focused on the United States, but I’m sure most liberal, democratic countries will see themselves in this book. Incredibly well-researched. And more than a few very uncomfortable conclusions.

When the apocalypse comes, it will look like: An angry Twitter mob demanding the right to vote via social media likes.

Its version of “Run! Save Yourself!:” Get more involved in party politics. Re-introduce the importance of policy expertise to positions of power. The Elevator Summary: The kids aren’t alright. No, really—I know every generation says that, but this time it’s true. Kids who grew up with smartphones (and have begun to enter the university system) are emotionally stunted, overly fragile, and exhibiting mental health issues at alarming rates.

Its Explanation for the World Being Fucked: I expected this book to be another, “Let’s all shit on social media together,” party, but it’s not. Social media, of course, does get its own chapter. But most of the book is focused on cultural shifts that have happened over the past couple generations.

Haidt and Lukianoff argue with a lot of convincing data that adolescents today are maturing emotionally and psychologically at lower rates and later than ever before. Their main targets are:

When the apocalypse comes, it will look like: A bunch of 20-somethings throwing temper tantrums, claiming that uncomfortable news headlines are the equivalent to “violence,” and responding with real violence.

Its version of “Run! Save Yourself!:” Let kids be kids. Teach them independence. Let them get hurt and figure out their problems themselves. Stop with the homework.

Notable Quote: “From time to time in the years to come, I hope you will be treated unfairly, so that you will come to know the value of justice. I hope that you will suffer betrayal because that will teach you the importance of loyalty. Sorry to say, but I hope you will be lonely from time to time so that you don’t take friends for granted. I wish you bad luck, again, from time to time so that you will be conscious of the role of chance in life and understand that your success is not completely deserved and that the failure of others is not completely deserved either. And when you lose, as you will from time to time, I hope every now and then, your opponent will gloat over your failure. It is a way for you to understand the importance of sportsmanship. I hope you’ll be ignored so you know the importance of listening to others, and I hope you will have just enough pain to learn compassion. Whether I wish these things or not, they’re going to happen. And whether you benefit from them or not will depend upon your ability to see the message in your misfortunes.”

Who Owns the Future?
by Jaron Lanier 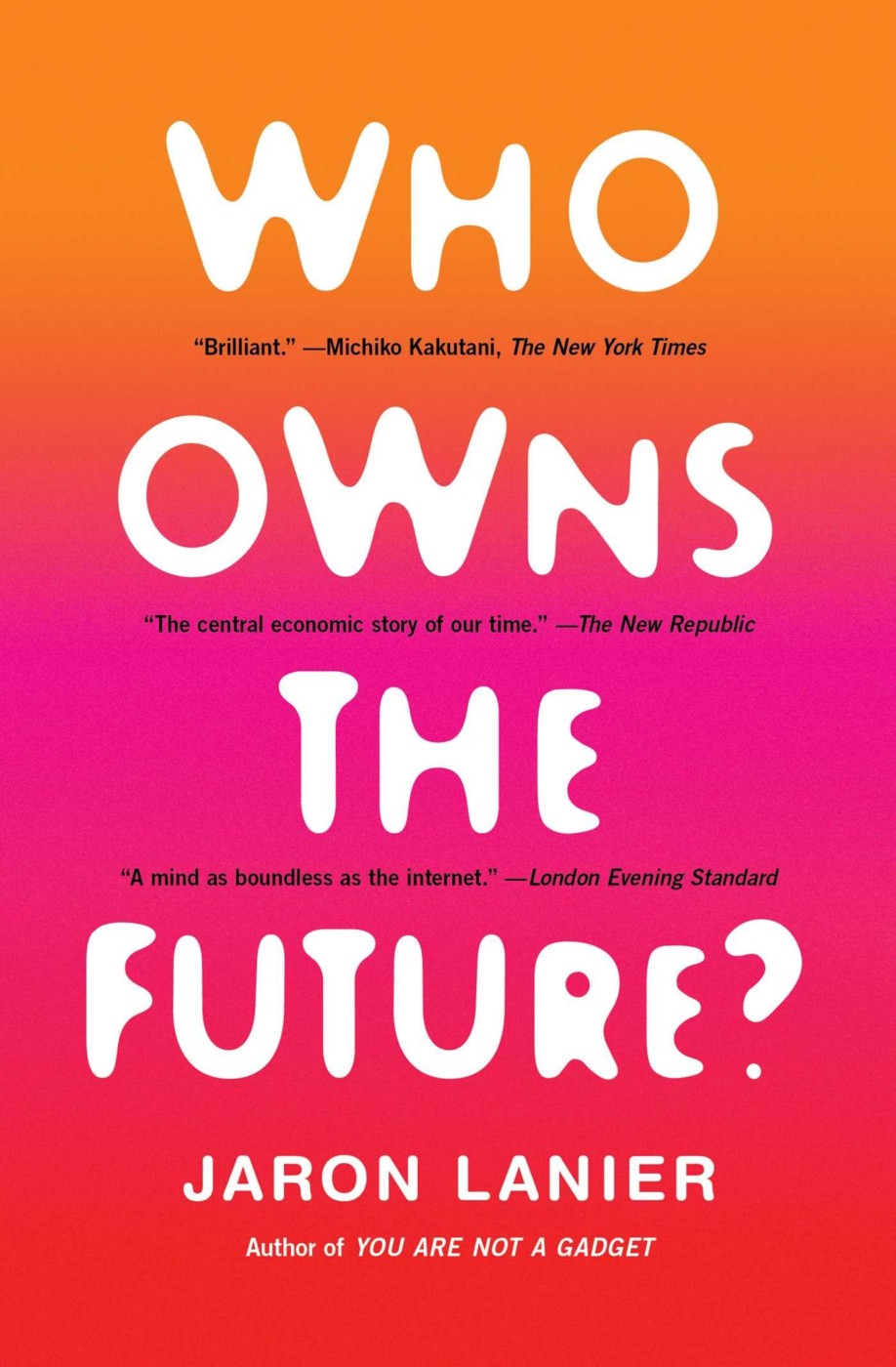 The Elevator Summary: In Who Owns the Future?, Jaron Lanier, one of the internet’s earliest engineers, argues with passion and seemingly endless wit that pretty much all of our problems boil down to one thing: for some reason, at some point, we all decided that information should be free.

Its Explanation for the World Being Fucked: Free information sounds great on paper, but it causes all sorts of deep, systemic problems when implemented at scale. For one, it spawns an extremely aggressive and intrusive advertising model. For two, the economics of data collection create a situation where a small number of servers collect all the data and gain terrifying amounts of power…and then inevitably abuse that power (*cough* Facebook). For three, when software eats the world, it generates greater inequality, not less. For four, when all information becomes free, it becomes valueless and meaningless. People feel entitled to start believing whatever they want, since it’s always unclear what information is more valuable than other information. For five–he can keep going… and does.

When the apocalypse comes, it will look like: An impossibly addictive online service that controls you by giving you everything you want (or at least, everything you think you want).

Its version of “Run! Save Yourself!:” Insist on paying for information. Block every ad you can. Support your favorite artists and content creators (*cough* like by supporting my work here).

Notable Quote: “Here’s a current example of the challenge we face. At the height of its power, the photography company Kodak employed more than 140,000 people and was worth $28 billion. They even invented the first digital camera. But today Kodak is bankrupt, and the new face of digital photography has become Instagram. When Instagram was sold to Facebook for a billion dollars in 2012, it employed only thirteen people. Where did all those jobs disappear to? And what happened to the wealth that those middle-class jobs created? This book is built to answer questions like these, which will only become more common as digital networking hollows out every industry, from media to medicine to manufacturing.”

The Death of Expertise
by Tom Nichols The Elevator Summary: Speaking of the value of information, Nichols goes on a rampage in The Death of Expertise, ripping apart the growing anti-intellectualism. But whereas Lanier focused on information technology, Nichols takes aim at our culture.

Its Explanation for the World Being Fucked: With our modern obsessions of freedom and equality and happiness, Nichols argues that we’ve taken these rights and applied them to a domain where they don’t belong: truth. People feel “the right” to have their opinions and beliefs respected, even though they are not qualified, have no credentials or offer no expertise. Pundits on TV claim that their beliefs that climate change doesn’t exist, or that vaccinations are harmful, are just as valid — and should be respected just as much — as their scientific counterparts. Nichols’ blame is scattershot. Everything from the usual internet gripes, to cable television, to the grade inflation happening in school, to school bureaucracies treating students as customers rather than, well, students.

When the apocalypse comes, it will look like: A parade of self-righteous morons.

Its version of “Run! Save Yourself!:” Practice some humility. Trust in science. Trust in people who have decades of experience in a field. In many ways, the issue today, above all others, is trust. The Elevator Summary: Another US-centric book, but Bowling Alone likely has broad applications in other parts of the world. The title refers to the fact that more Americans bowl than in the past. Yet, there are fewer bowling leagues than ever before. Meaning: more and more, people are spending time alone.

Its Explanation for the World Being Fucked: The problem is that modern society requires community engagement to function well. When everyone is just off doing their own thing, a lot of institutions and social necessities begin to fall apart. And it’s in this way that Putnam’s reams of research is startling. It’s not just bowling leagues that are disappearing. Churches, parent-teacher associations, political activists, neighborhood watches, bridge clubs, veterans organizations. You name a community, and it’s likely disappearing.

My own takeaway from this, having studied human happiness for years, is that people rely on a sense of community and shared effort to maintain healthy and stable lives. The fact that people are opting out of these opportunities for community and local impact, in a ceaseless obsession of online media and global fame, likely explains a lot of the social changes going on today. And a lot of the drops in mental health, as well.

When the apocalypse comes, it will look like: People dying alone in their homes, without anyone knowing.

Its version of “Run! Save Yourself!:” Get involved. Get out of your house. Get off your phone. Engage with people doing things locally, around you, things that you can see and measure their effect on the community. Things that are face-to-face and require commitment.

Notable Quote: “Community has warred incessantly with individualism for preeminence in our political hagiology… The dominant theme is simple: For the first two-thirds of the twentieth century a powerful tide bore Americans into ever deeper engagement in the life of their communities, but a few decades ago— silently, without warning— that tide reversed and we were overtaken by a treacherous rip current. Without at first noticing, we have been pulled apart from one another and from our communities over the last third of the century.”

Looking for more books to read?

Well, I put together a list of over 200 of the best books to read, organized by topic for The Subtle Art School members.

The School is a collection of 6 brand-new video courses each with a pretty printable workbook, plus 3 bonus courses, ebooks on my favorite topics, commentaries on all my books, and a “library” of best books to read. Oh, did I mention I also do a live monthly webinar with members where I’ll answer all your questions and talk about tacos?

If you’re already a site member, you have full access to the School (just log in). If not, what are you waiting for? Check it out.