Stop Wishing for Major Life Changes and Instead, Start Making Them Happen

A straightforward approach to successfully implementing any change into your life

Or read on below to learn more.

And I’m here to ask you one question: if you could change anything about your life, what would it be?

Would you make more money?

Finally get that bitchin’ beach bod?

Become the mayor of Cooltown and be everybody’s best friend?

Find that perfect someone?

Or, if you’re like most people, you don’t have a damn clue. You feel torn eight different ways. You dream of one thing on Tuesday and a completely different thing on Thursday.

Thankfully, as your Fairy God Fucking Mother, I’ve created a course to help you with that.

The Build a Better Life Course walks you through, step by step, how to figure out what the hell it is you want, then how to actually get it.

I’ve used some version of this system myself for over a decade now. When I started, I was penniless and living on my friend’s couch. Now, I can honestly say I’m living a life that surpasses even my biggest dreams back then.

Is it all because of this system? No, you still gotta get out there and, you know, Do Difficult Shit™. But think of this course as being your guide through that process.

Ready to Build a Better Life?

How to Create a Better Life, One Step at a Time

The problem is that these are just arbitrary actions. And anyone with even an inkling of motivation can write this kind of stuff in their goals journal.

They might even have the willpower to half-ass their way through a certain number of actions. But this won’t necessarily create any real change.

This type of approach to change sees people burn out, give up, and whine on Facebook. That’s because it’s shortsighted.

Real change comes from a change in your habits.

And a change in habits comes from a long, sustained alteration of small actions.

Let me illustrate it this way: Let’s say you and I are driving along down the road, side by side, in separate vehicles.

We come to a fork in the road, but the two roads in this fork are actually only separated by about one degree.

I take one road, you take the other. Now we’re only traveling away from each other ever so slightly at one degree of separation.

At first, the change is so slight, you can barely tell that we’re technically traveling in different directions.

But over a long enough period of time, if our paths maintain one degree of difference in direction, we’ll wind up far, far away from each other.

There are small (but important) course corrections you can make right now that, over time, will put your life in a very different place from where it is today.

Most people focus too much on the destination—lose 50 pounds, get a promotion, make more money, go on a gazillion dates, bang the quarterback/head cheerleader/librarian, etc.—when instead, they should be focusing on the systems they have in place to get them there. Because with the right system, your goals practically take care of themselves.

This course will help you build that system. The goal of this course is to get you to dig deep and really figure out what it is you want in life and then create a system to get you there.

The course is made up of a series of written exercises. You can either do them on your computer or you can print out a really pretty digital workbook and work through them by hand.

Either way, prepare to get mindfucked. 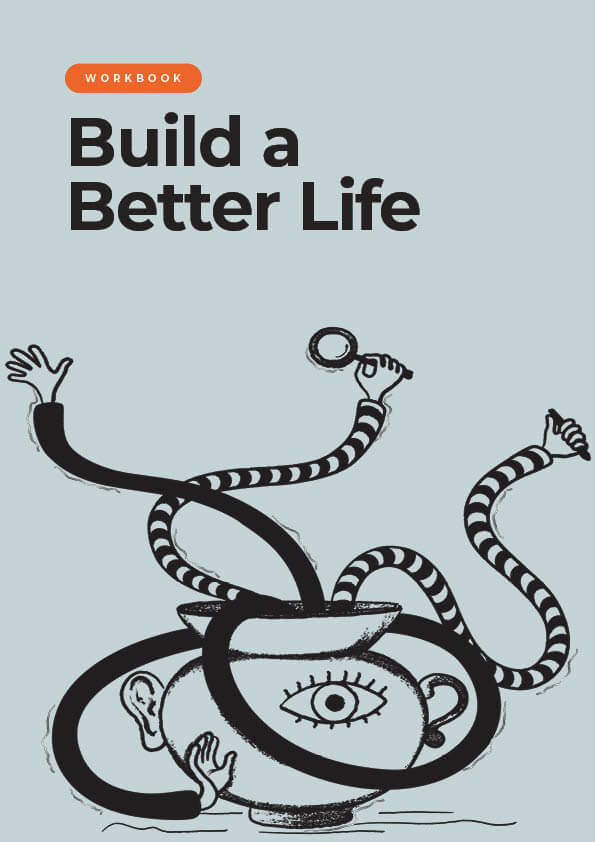 Get Started on Your Better Life Today

Praise for the Build a Better Life Course

I thought it was very helpful. Forcing myself to endure the 20-minute thought exercise and the Time/Ratio exercise really illuminated things. The largest takeaway was the idea of forming habits vs goals, which really resonated with me.

This is a great starting point to get your shit together. I think this level of planning strikes a great balance between building a thoughtful framework for the future and taking action towards that future.

This is a short and sweet long-term and short-term vision casting and goal-setting tool. I like that it is step-by-step from broad values down to specific daily actions. Also, nicely records your answers for future reference.

The course provides the opportunity to achieve an outlook that builds upon a person’s current perspective. Mark offers insights that were deep and helpful.

And That’s Not All

With a single subscription, here’s what you you get

Signing up is risk-free

Get Started on Your Better Life Today

Which payment methods and credit cards do you accept?

You can pay by credit card and PayPal. The following credit cards are accepted: Visa, MasterCard, American Express, JCB, Discover, and Diners Club. If you’re signing up on the iOS or Android app, you can use Apple Pay or Google Pay.

Is my payment secure?

Yes, we take your security very seriously. The signup page (and the entire site) is encrypted with 128-bit SSL, meaning that any information you submit is secure.

What if I made a mistake or suddenly decide I hate you and want my money back?

You can ask for your money back up to 60 days after the transaction. I’ll send it over, no questions asked, along with the salt of my tears. Please note that refunds are not given by default, but only on request.

Is this a recurring subscription?

When/how can I cancel my subscription?

You can cancel any time. There is a link in your member profile. Or you can email me and I’ll get it done.

After you cancel, you have access to everything until the end of your paid-for period.

Will you be doing any special events or meet-ups for premium subscribers in the future?

Yes! I have done special meet-ups for premium subscribers in the past and will continue to do it in the future. Periodically, I travel for speaking engagements, readings, or media appearances. When in various major cities, I shoot emails to subscribers in that area and have a little meet-up.