The One Rule for Life

Kant was one of the most influential thinkers in modern history. His philosophy of morality doesn't just have lofty, theoretical implications. We can apply it to our everyday lives as well.

Depending on your perspective, Immanuel Kant was either the most boring person on the planet or a productivity hacker’s wet dream. For over 40 years, he woke up every morning at 5:00 AM and wrote for exactly three hours. He would then lecture at the same university for exactly four hours. He followed that up with lunch at the same restaurant each day. Then, in the afternoon, he would go on an extended walk through the same park, on the same route, leaving and returning home at the exact same time. Every day.

Kant spent his entire life in Königsberg, Prussia. I mean that literally. He never left the city. Despite the sea being an hour away, he never saw it.1

Kant was efficiency personified. He was so mechanical in his habits that his neighbors joked they could tune their clocks based on when he left his apartment each day. He would leave for his daily walk at 3:30 PM, have dinner with the same friend every evening, and return home to finish work and go to bed at exactly 10:00 PM.

It’s easy for us to scoff at a guy like this. What a dweeb. Seriously, get a life, dude.

But Kant was one of the most important and influential thinkers in modern history. He did more to steer the world from his single-room apartment in Prussia than most kings and armies ever did before and since.2 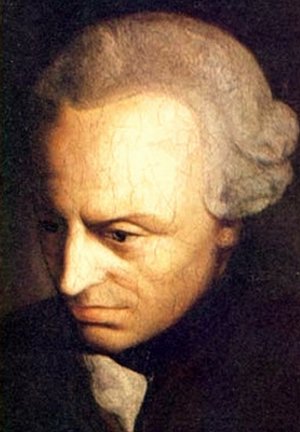 If you’re living in a democratic society that protects individual rights, you have Kant to partially thank for that. He was the first person to ever envision a global governing body that could guarantee peace across much of the world. He described space/time in such a way that it inspired Einstein’s discovery of relativity.3 He came up with the idea that animals could potentially have rights,4 invented the philosophy of aesthetics and beauty, and resolved a 200-year philosophical debate in the span of a couple hundred pages. He reinvented moral philosophy, from top to bottom, overthrowing ideas that had been the basis of western civilization since Aristotle.

Kant was an intellectual badass. If brains had balls, Kant’s would have been made out of steel and walked funny. His ideas, particularly about ethics, are still discussed and debated in thousands of universities today.

And that’s what I want to talk about: Kant’s moral philosophy, and why it matters.

Well, that, right there, is moral philosophy. Any time you say, “Who cares?” or “What’s the big deal?” you’re essentially questioning the value of something. Is it worth your time and attention? Is it better/worse than something else? These are all questions of value, they all fall under the umbrella of moral philosophy. Kant’s moral philosophy is unique and counterintuitive. Kant believed that for something to be good, it had to be universal—that is, it can’t be “right” to do something in one situation and “wrong” to do it in another. If lying is wrong, it has to be wrong all the time. It has to be wrong when everyone does it. Period. If it isn’t always right or always wrong, then that cannot be a valid ethical principle.

Kant called these universalized ethical principles “categorical imperatives”—rules to live by that are valid in all contexts, in every situation, to every human being.

Well, holy shit, universal laws that dictate all morality for every human being? Sure, want fries with that?

It’s so impossible, it sounds ludicrous. But Kant made a hell of an attempt. In fact, he made a number of attempts at creating categorical imperatives. Some of those attempts were quickly ripped to shreds by other philosophers. But others have actually held up the test of time to some degree.

One of them, in particular, has kind of stuck. And in all of my years reading and studying philosophy, psychology, and other sciences, it’s one of the most powerful statements I’ve ever come across. Its implications reach into every area of each person’s life. In a single sentence, it sums up the bulk of all of our ethical intuitions and assumptions. And in each situation, it points to a clear direction for how we should be acting and why.

One Rule to, Err… Rule Them All

“Act that you use humanity, whether in your own person or in the person of any other, always at the same time as an end, never merely as a means.”5

I know: what the actual fuck?

OK, let’s back up for a second.

Kant believed that rationality was sacred. When I say rationality, I don’t mean like sudoku or chess grandmaster rationality. I mean rationality as the fact that we are the only known creatures in the universe that are able to make decisions, weigh options, and consider the moral implications of any and every action.

To Kant, the only thing that distinguishes us from the rest of the universe is our ability to process information and act out consciously in the world. And this, to him, is special. Exceedingly special. For all we know, we are the only shot the universe has at intelligent self-organization. Therefore, we need to take it seriously. And, therefore, rationality and protecting conscious choice must be the basis for all of our moral reasoning.

Kant wrote that “without rationality, the universe would be a waste, in vain, and without purpose.” To Kant’s mind, without intelligence, and the freedom to exercise that intelligence, we might as well just all be a bunch of rocks. Nothing would matter.

Therefore, Kant believed that all morality is derived from the protection and promotion of rational consciousness in each individual.

“Each person must never be treated only as a means to some other end, but must also be treated as an end themselves.”

If this version of Kant’s Rule makes sense to you, skip the following grey box. If you’re still confused about how a person can be a “means” or an “end” then this box will explain it further.

Let’s say I’m hungry and I want a burrito. I get in my car and drive to Chipotle and order my usual double meat monster that makes me oh-so-happy on a weekly basis.

In this situation, eating the burrito is my “end” goal. It’s ultimately why I’m doing everything else—getting in the car, driving, buying gas, and so on. All of these things I do to get the burrito are the “means”, i.e., the things I must do in order to achieve my “end.”

If you call a friend to find out how they’re doing, calling them is a means, finding out how they are doing is your end. If you leave a party early so you can wake up early in the morning, leaving the party is the means, and waking up early is your end.

Means are things that we do conditionally. I don’t want to get in my car and drive. But I want a burrito. Therefore, driving is the means to my burrito end.

An end is something that is desired for its own sake. It is the defining motivating factor of our decisions and behaviors. If I wanted to eat a burrito only because my wife wanted a burrito and I wanted to make her happy, then the burrito is no longer my end—it is now a means to an even greater end: making my wife happy. And if I only wanted to make my wife happy so I could hopefully get laid tonight, now my wife’s happiness is a means to a greater end of sex.

Likely that last example made you squirm a bit and think I’m kind of a dirtbag. And that’s exactly what Kant is talking about. His argument—hell, his rule—states that treating any human being as a means to some other end is the basis of all unethical behavior. So treating a burrito as a means to my wife’s end is fine. It’s good to make your spouse happy sometimes! But if I treat my wife as a means to the end of sex, then I am now treating her as a means, and, Kant would argue, that is some shade of wrong.

(P.S. If you didn’t notice, I was really hungry while writing this.)

Kant’s formulation checks all the boxes that we would expect from a theory of morality. But it also goes way beyond common-sense morality. In fact, I will try to argue that Kant’s Rule plausibly extends to pretty much everything that we value as right and good today. Check it out:

The Moral Implications of Kant’s Rule

The list below is incomplete. Some of the items, Kant explicitly wrote about. Others are extrapolations that I’ve taken from his work and applied to my own values. My hope is that by the end of it, you see the incredible flexibility of this single moral maxim to extend to almost all areas of human life.

The Impact of Kant’s Philosophy

Kant’s philosophy, if you dive into it, is riddled with inconsistencies and issues. But the power of his original ideas has undoubtedly changed the world. And strangely, when I came across them a year ago, they changed me.

I had spent most of my 20s pursuing many of the items on the list above but I pursued them for practical and transactional reasons. I pursued them as means because I thought that they would make my life better. Meanwhile, the more I worked at it, the emptier I felt.

But reading Kant was an epiphany. In only 80 pages, Kant swept away decades-worth of assumptions and beliefs.11 He showed me that what you actually do doesn’t matter as much as the purpose behind doing it. And until you find the right purpose, you haven’t found much of anything at all.

Kant wasn’t always a humdrum, routine-obsessed dork. He wasn’t always the mayor of Boreville. In fact, in Kant’s younger years, he was a bit of a party hound as well. He would stay up late drinking wine and playing cards with his friends. He’d sleep late and eat too much and host big parties.

It wasn’t until he turned 40 that he dropped it all and developed the routine life he later made famous. He said that he developed this routine at 40 because he realized the moral implications of his actions and decided that he would no longer allow himself to waste the precious time or energy his consciousness had left.

Kant called this “developing character”—a.k.a., building a life designed around maximizing your own potential. He believed most people can’t develop true character until they reach middle age, because until then, they are still too seduced by the fancies and whims of the world, blown this way and that, from excitement to despair and back again. We’re too obsessed with accumulating more means and are hopelessly oblivious to the ends that drive us.

To develop character, a person must master their own actions and master themselves. And while few of us can accomplish that in a lifetime, Kant believed it’s something we each have a duty to work towards.

In fact, he believed it was the only thing to work towards.