It was high school. I was 16 and I was pissed off. My English teacher assigned us a creative writing assignment: Write anything about being in high school. Anything.

So I wrote a story about a school shooting.

Except, in my story, once the shooter was cornered by police, instead of blowing his own brains out he began teaching the children himself, executing the ones who misbehaved or didn’t follow directions. At first, his executions seemed irrational and cruel. But as the kids got older, the executions became more pragmatic and designed to prepare the survivors for the “real world.” The story ended at the graduation ceremony. The shooter cried as he hugged all of his students. He congratulated them and told them how proud he was of their accomplishments.

The story received a horrible grade. But so did most of my writing assignments in school. It was always for the same handful of criticisms: I deviated too far from what was assigned, I was too personal in my writing and shared too much, my writing was sometimes offensive or just plain weird.

School convinced me I was a lousy writer. Which is weird, because now I’m a professional writer. Full-time living. Eat that Mr. Jacobs. And ironically, the reason people read me is the same reason I made bad grades in school. I deviate from conventional topics. I am extremely personal and share a lot of myself. My stories are sometimes offensive or just plain weird.

There are plenty of people out there who criticize what our education system teaches and how it teaches it. But I see no reason to get into that here. I’m no expert and I’m no teacher. I just write silly things on the internet so people will like me on Facebook.

(Still working on that last one.)

As I dug through the research, and it became more and more clear what sorts of influences are emotionally healthy and unhealthy for a kid growing up, I kept thinking about school and those writing assignments.

Our childhood and adolescence is when we discover how we relate to the world and how we relate to other people. It’s where we learn what success means and how to achieve it. It’s where we form our first values and establish our identities for the first time. Obviously, school is not the only influence during this period—our parents and peer group are more influential—but it’s still a major one.

1. You Learned That Success Comes From the Approval of Others

We seem to live in a culture today where people are more concerned with appearing to be something important rather than actually being something important. See: the Kardashian sisters, Donald Trump, 63% of all Instagram users, athletes who make rap albums, the entire US Congress, etc.

There are a number of reasons for this, but a large part of it is that as we grow up, we are rewarded and punished based on meeting the approval of other people’s standards, not our own. Make good grades. Take advanced courses. Play on the sports teams. Score high on standardized tests. These metrics make for a productive workforce but not a happy one.

The why’s of life are far more important than the what’s of life and that’s a message that is rarely communicated growing up. 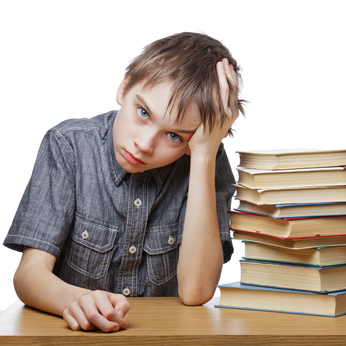 Growing up, everything you’re told to do is for no other purpose than to earn the approval of others around you. It’s to satisfy somebody else’s standard. How many times growing up did you ever hear the complaint, “This is pointless. Why do I have to learn this?” How many times do I hear adults saying, “I don’t even know what I like to do, all I know is I’m not happy.”

Our system is performance-based and not purpose-based. It teaches mimicry and not passion.

Performance-based learning isn’t even efficient. A kid who is excited about cars is going to have a hell of a much better time learning about math and physics if math and physics can be put into the context of what he cares about. He’s going to retain more of it and become curious to discover more on his own.

But if he isn’t responsible for the why of what he is learning, then what he’s learning isn’t physics and math, it’s how to fake it to make someone else happy. And that’s an ugly habit to engrain into a culture. It churns out a mass of highly efficient, low self-esteem people.

In the past few decades, concerned parents and teachers have tried to remedy this “self-esteem” issue by making it easier for kids to feel successful. But this just makes the problem worse. Not only are you training kids to base their self-worth on the approval of others, but now you’re giving them that approval without them having to actually do anything to earn it!

Or as Branford Marsalis, one of the greatest saxophone players of all time, so eloquently put it:

The emphasis on success as external performance is a vestige of the industrial age—it molded kids into pliant worker bees, not happy individuals. It doesn’t make sense anymore.

External performance markers are fine, and likely even necessary, but they’re not sufficient anymore. There has to be a new starting point. There has to be personal purpose introduced into education at some point. There needs to be a why to learning to go with the what. The problem is that everybody’s why is personal and it’s impossible to scale. Especially when teachers are so over-worked and underpaid.

This is partly why I created my premium subscription with place where you learn the why of life. There’s a collection of courses that will help you  find a sense of purpose, become more resilient, improve your emotional health, and create more fulfilling relationships.

2. You Learned That Failure Is a Source of Shame

Earlier this year I had lunch with one of those people that you just can’t believe exist. He had four degrees, including a masters from MIT and a Ph.D. from Harvard (or was it a masters from Harvard and a Ph.D. from MIT? I can’t even remember). He was at the top of his field, worked for one of the most prestigious consulting firms and had traveled all over the world working with top CEOs and managers.

And then he told me he felt stuck. He wanted to start a business but he didn’t know how.

He told me that throughout his entire life he had mastered the art of getting it right on the first try. That’s how schools reward you. That’s how companies reward you. They tell you what to do and then you nail it. And he could always nail it.

In his book, David and Goliath, Malcolm Gladwell wrote a chapter about how a disproportionate number of insanely successful people are dyslexic and/or high school dropouts. Gladwell suggested a simple explanation: these were talented people who, for whatever reason, were forced to become accustomed to failure early on in their lives. This comfort with failure allowed them to take more calculated risks and see opportunities where others weren’t looking later on.

But that’s not how life works at all.

3. You Learned to Depend On Authority

Sometimes I get emails from readers who send me their life stories and then ask me to tell them what to do. Their situations are usually impossibly personal and complex. And so my answer is usually, “I have no clue.” I don’t know these people. I don’t know what they’re like. I don’t know what their values are or how they feel or where they come from. I’m just some guy who writes obnoxious shit on the internet to get more Instagram followers. How would I know?

I think there’s a tendency for most of us to be scared of not having someone tell us what to do. Being told what to do can be comfortable. It can feel safe because ultimately, you never feel entirely responsible for your fate. You’re just following the game plan. Dependence on authority, like focusing on performance over purpose, is a vestige of our industrial history. Obedience was a major societal value 100-200 years ago. It was necessary for society to thrive.

But we should all be capable of choosing the authority in our lives. Adherence to authority should never be compulsory, and it should never go unquestioned—whether they’re your preacher, your boss, your teacher or your best friend. No one knows what’s right for you as well as you do. And not letting kids discover that fact for themselves may be the biggest failure of all.