How to Change Your Life

Change can be a difficult and slow process, but if you can see things just a little differently, you can start to see big progress. Here are 7 ideas that can help you figure out how to change your life.

So you want to change your life, eh? You want to turn it all around and ooze silky smooth confidence while you kill it in a new career with a new car and a new spouse and a new dog because the old one smells like a dead rat?

When most people set out to change their lives, they often focus on all the external stuff, like a new job or a new location or new friends or a new romantic prospects and on and on.

The reality is that changing your life starts with changing the way you see everything in your life. So below are some specific ways you can start to change your life right now.

7 Ways to Change Your Life

A lot of people get stuck when they try to to change their lives because they don’t know “where to start” or “what to do.” The simple answer is: to do something—anything, really.

The motivation to do anything—like change your entire life around—doesn’t just come from some magical, mystical place within you. Action is both the effect of motivation and the cause of it. You’ll figure out whether or not it’s right or not in good time (trust me), but only if you stop procrastinating and start engaging with the world.

2. Recognize That Everything You Do Has a Cost—Be Willing to Pay It

A lot of life ultimately amounts to a series of tradeoffs. Everything has an opportunity cost, and the big things we want in life—like happiness and healthy relationships and wealth—they all have big opportunity costs. You don’t get to have the dream career at the top without putting in your time at the bottom, then taking a risk or twelve and breaking a few hearts along the way.

So the most important question you can ask yourself isn’t about what you want, it’s about what you’re willing suffer for. As I’ve previously said, doing what you love is not always loving what you do. So what kind of shit sandwich can you stomach? And—importantly—do you even really want your dream in first place?

3. Embrace the Fact That No One Gives a Shit

Look, I know you were told that you’re a special little snowflake in a sea of otherwise normal people, but I have some bad news for you: very few people actually give a shit about you because you’re actually not all that special (that, and people are too concerned with themselves to begin with). But before you take your ball and hit the back button on your browser, I want you to consider just how liberating that is: No one gives a shit. You are free to do whatever the hell you want and no one will care if you fail spectacularly. If anything, they’ll respect you more (for like, 5 seconds and then they’ll go back to posting selfies on Instagram). 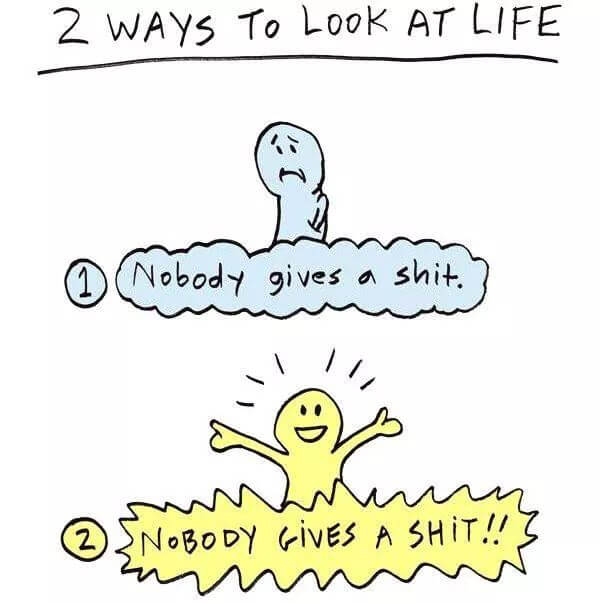 So instead of basing all your life decisions on what others think of you or what you do or how attractive you’ll appear in your new car, figure out exactly what it is you value most in your life and cut all the other bullshit out.

A lot of books and self-development advice focuses on goals and “systems” of developing, like, S.M.A.R.T. goals and creating an unrelenting focus on ACCOMPLISHING EVERY SINGLE GOAL YOU EVER SET NO MATTER WHAT OR YOU ARE A FUCKING LOSER.

The truth is, in and of themselves, goals are pretty overrated. There’s nothing wrong with having goals, but obsessing over them is often counterproductive because, in reality, achieving a goal isn’t always what it’s cracked up to be. Instead, I like to focus on creating a system of healthy habits that focus on the most important, highest impact areas of my life. My goals pretty much take care of themselves at that point.

5. Figure Out Who You Are

Simple question: do you really know who you are? I mean do you know what drives you, what terrifies you, why you do the things you do, and do you know how others perceive you too? Self-awareness is, somewhat paradoxically, in short supply these days (self-delusion, on the other hand, is not). But there’s really no way to change your life if you don’t know what you’re changing about yourself in the first place.

6. Focus on Fewer Things (and Get Really, Really Good at Them)

In our modern-day culture of make more, buy more, fuck more, be more, I’m guessing that some jackass on the internet telling you that “more” is not actually always “more” in life is sure to be drowned out pretty quickly with all the “life hacking” and “lifestyle optimization” podcasts and blog articles and blah blah blah out there.

One of the consequences of living in a time with seemingly endless opportunities is that you have to choose which opportunities to pursue (everything has a cost, remember?). And I hate to break it to you, but you can’t have it all. And so, for the vast, vast majority of things you do, you will simply be average. That’s OK. You don’t have to be a superstar at everything you do to live a meaningful life.

But if you can do one or a few things really, really well, you’ll be ahead of almost everyone else who’s distracted by their smartphones and arguing about things they have no influence over on Facebook.

But there’s a simple fix, and no, it doesn’t involve lowering your standards. It only requires that you look at things a little differently than you have been. As hokey as it sounds, be grateful for what you have while you’re working towards what you want. Everything you need to be happy is likely right in front of you. Start taking the time to appreciate the simple pleasures in life, like having a beer with a friend, taking a walk in nature, calling your grandma and telling her you love her, going to a game with your buddies.

These things might seem mundane, but if you can’t enjoy the simple joys in life, you won’t enjoy much if and when you actually do change your life either.

6 Books That Will Change Your Life

Articles About Changing Your Life

Below is a list of articles I’ve written that will you get started changing your life. Take your time. There’s a lot of information covered here (and hopefully a real mind fuck or two sprinkled throughout). Enjoy.