There’s a part of Navy SEAL training called “drown-proofing” where they bind your hands behind your back, tie your feet together, and dump you into a 9-foot-deep pool.

Your job is to survive for five minutes.

Like most of SEAL training, the vast majority of cadets who attempt drown-proofing fail. Upon being tossed into the water, many of them panic and scream to be lifted back out. Some struggle until they slip underwater where they proceed to lose consciousness and have to be fished out and resuscitated. Over the years, a number of trainees have even died during the exercise.

But some people make it. And they do so because they understand two counterintuitive lessons.

The first lesson of drown-proofing is paradoxical: the more you struggle to keep your head above water, the more likely you are to sink.

With your arms and legs bound, it’s impossible to maintain yourself at the surface for the full five minutes. Even worse, your limited attempts to keep your body afloat will only cause you to sink faster. The trick to drown-proofing is to actually let yourself sink to the bottom of the pool. From there, you lightly push yourself off the pool floor and let your momentum carry you back to the surface. Once there, you can grab a quick breath of air and start the whole process over again.1

Strangely, surviving drown-proofing requires no superhuman strength or endurance. It doesn’t even require that you know how to swim. On the contrary, it requires the ability to not swim. Instead of resisting the physics that would normally kill you, you must surrender to them and use them to save your own life.

The second lesson of drown-proofing is a bit more obvious, but also paradoxical: the more you panic, the more oxygen you will burn and the more likely you are to fall unconscious and drown.2 In a sick and twisted way, the exercise turns your survival instinct against you: the more intense your desire to breathe, the less you will be able to breathe. The more intense your will to live, the greater the chance you will die.

More than a test of physical will, drown-proofing is a test of each cadet’s emotional self-control in situations of extreme danger. Can he control his own impulses? Can he relax in the face of potential death? Can he willingly risk his life in the service of some higher value or goal?

This skill—the ability to let go of control when one wants it most—is one of the most important skills anyone can develop. And not just for SEAL training. For life.

Most people assume the relationship between effort and reward is one-to-one. We think that working twice as long will produce twice the results. That caring about a relationship twice as much will make everyone feel twice as loved. That yelling your point twice as loud will make you twice as right.

The assumption here is that most of life exists on a linear curve, that there’s a one-to-one ratio between effort and reward with everything: 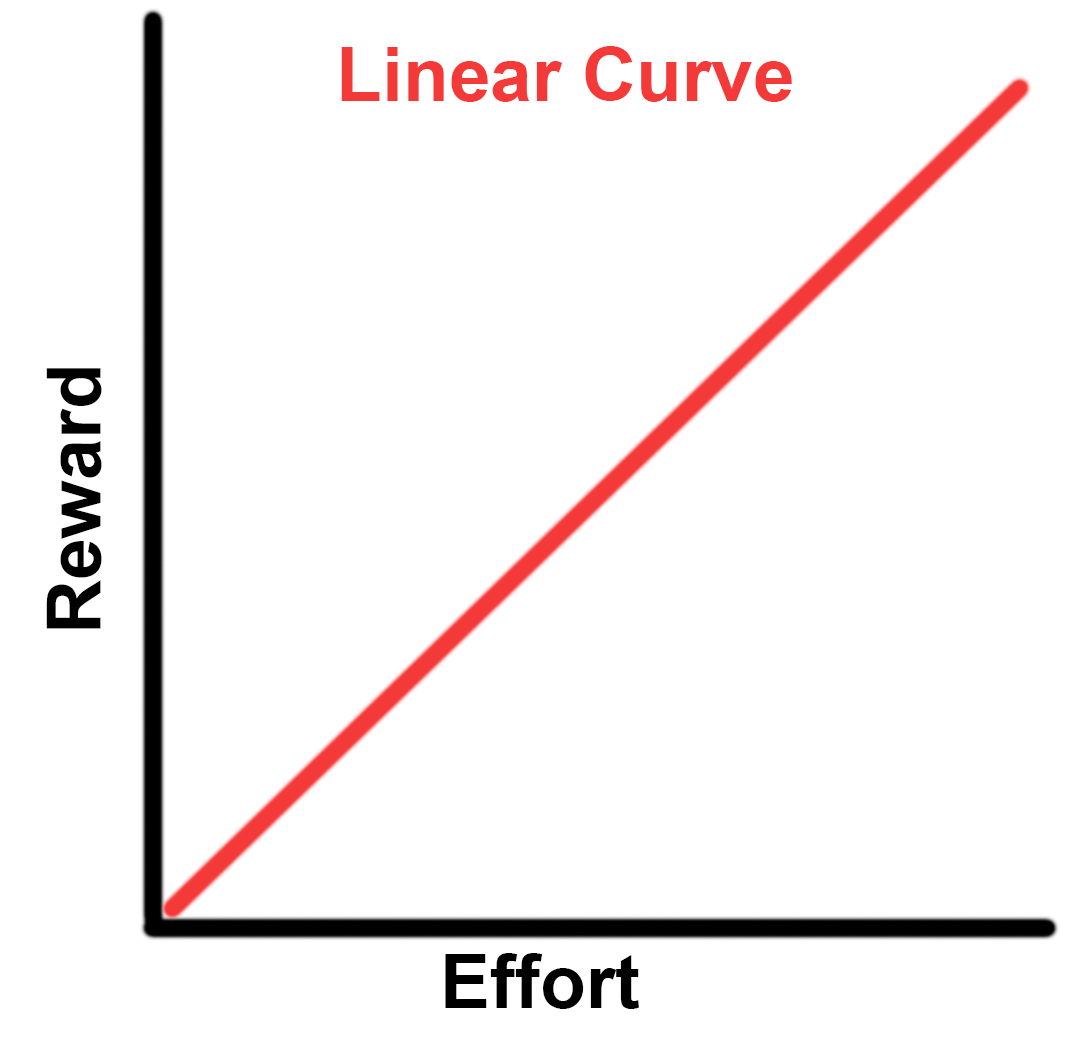 But allow me to inform you—as someone who just tried drinking twice the normal amount of Red Bull so he could finish editing this damn thing—this is almost never true. Most of the world does not exist on a linear curve. Linear relationships only exist for mindless, rote, repetitive tasks—driving a car, filling out reams of paperwork, cleaning the bathroom, etc. In all of these cases, doing something for two hours will double the output of doing it for one hour. But that’s simply because they require no thought or ingenuity. 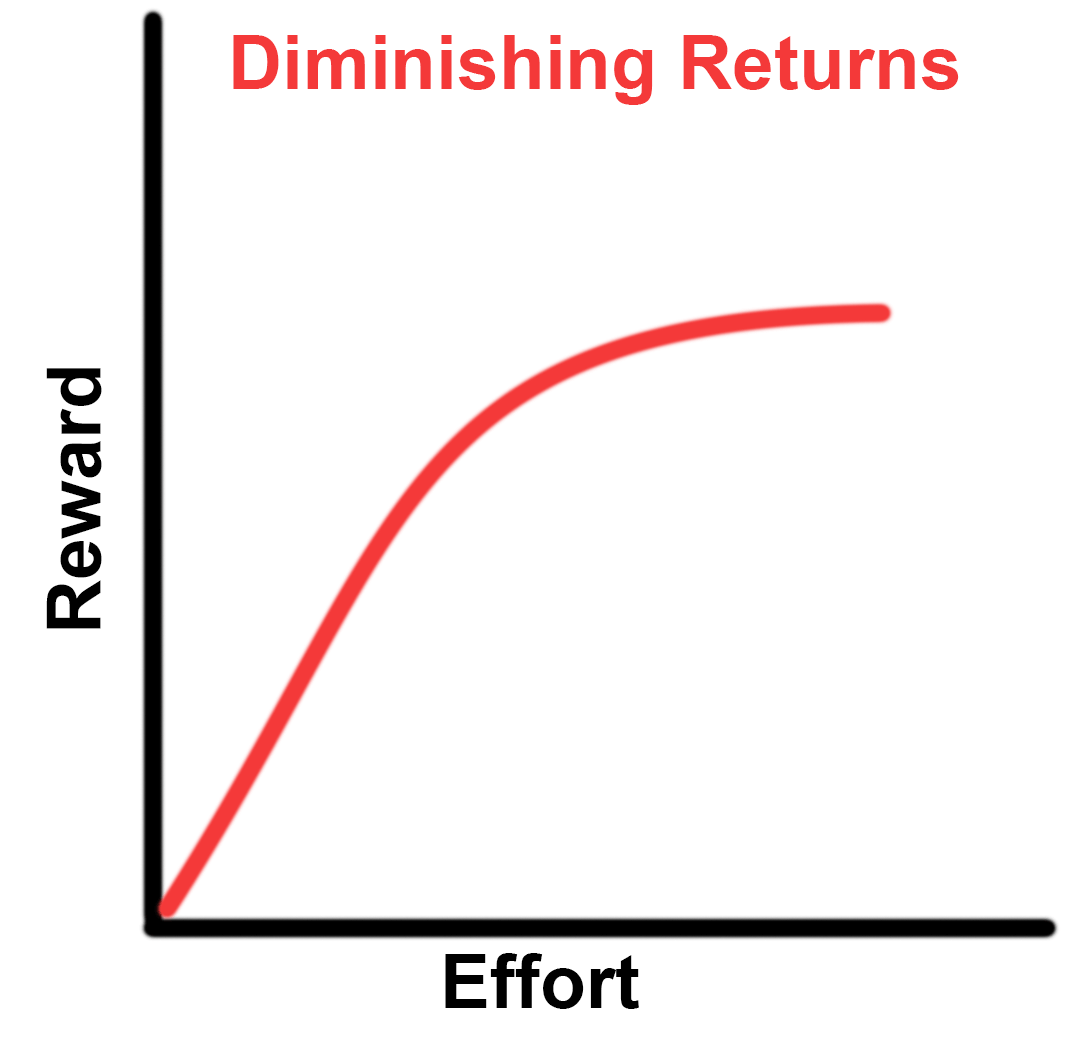 The concept of diminishing returns applies to most experiences that are complex and novel, and even many of the mundane ones. The number of showers you take in a day, the number of chicken wings you inhale during happy hour, the number of trips home to visit your mother in a year—these are all experiences that start out highly valuable at first but then diminish in value the more frequently you do them (sorry, Mom).

Another example: studies on work productivity show that we’re really only productive for the first four to five hours of each day.5 Everything after that suffers severely diminished returns, to the point where the difference between working for 12 hours and 16 hours is basically nothing (not counting sleep deprivation).6

Friendships operate on a diminishing returns curve. Having one friend is vital. Having two is clearly better than one. But having 10 instead of 9 changes little in your life. And having 21 instead of 20 just makes remembering people’s names that much more difficult.

But there’s another curve, one that you’ve probably never seen or heard of before—and that’s largely because I make a lot of this shit up. That’s the inverted curve:7 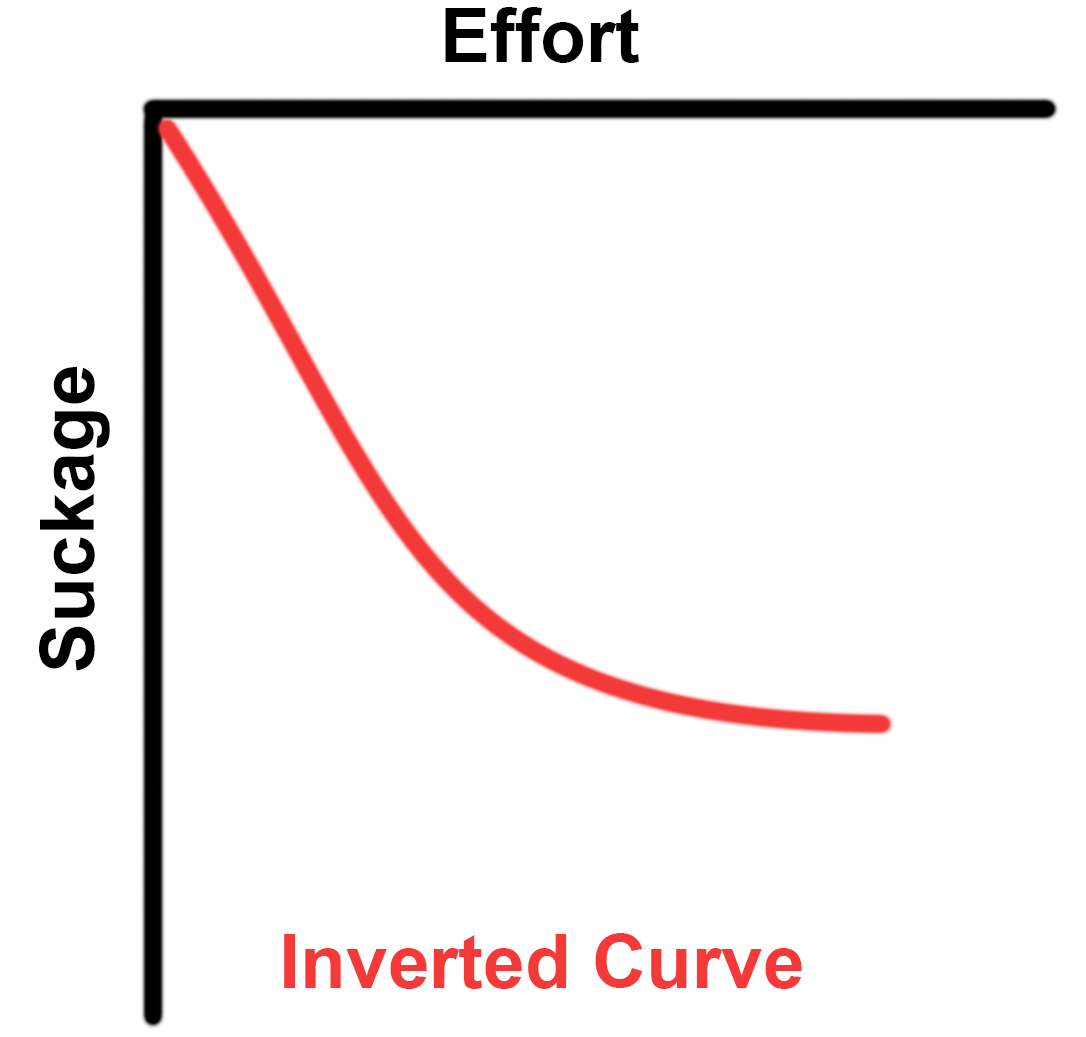 The inverted curve is the bizarro “Twilight Zone” curve, where effort and reward have a negative correlation—that is, the more effort you put into doing something, the more you will fail to do it.

But I know you’re thinking, “So what, Mark? I’ve usually had too many piña coladas to even find the deep end of the pool, much less bind my arms and legs and try to survive in it. Who gives a shit about inverted curves?”

But when the action becomes purely psychological—an experience that exists solely within our own consciousness—the relationship between effort and reward becomes inverted.

Pursuing happiness takes you further away from it. Attempts at greater emotional control only remove us from it. The desire for greater freedom is often what causes us to feel trapped. The need to be loved and accepted prevents us from loving and accepting ourselves.

Aldous Huxley once wrote, “The harder we try with the conscious will to do something, the less we shall succeed. Proficiency and results come only to those who have learned the paradoxical art of doing and not doing, or combining relaxation with activity.”8

The most fundamental components of our psychology are paradoxical. This is because when we consciously try to create a state of mind, the desire for that state of mind creates a different and often opposite state of mind from the one we’re trying to create.

But this extends to most–if not all–aspects of our mental health and relationships:

These internal, psychological experiences exist on an inverted curve because they are both the cause and the effect of the same thing: our minds. When you desire happiness, your mind is simultaneously the thing that is desiring and the target of its own desires.9

When it comes to these lofty, abstract, existential goals, our minds are like a dog who, after a lifetime of successfully chasing and catching various small creatures, has turned and decided to exact that same strategy on its own tail. To the dog, this seems logical. After all, chasing has led her to catch everything else in her doggy life. Why not her tail, too?

But a dog can never catch her own tail. The more she chases, the more her tail seems to run away. That’s because the dog lacks the perspective to realize that she and the tail are the exact same thing.

The goal is to take your mind—a wonderful thing that has spent its life learning to chase various creatures—and teach it to stop chasing its own tail. To stop chasing meaning and freedom and happiness because those only serve to move it further away from itself. To teach it to achieve what it desires by giving up what it desires. To show it how the only way to reach the surface is to let itself sink.

And how do we do this? By letting go. By giving up. By surrendering. Not out of weakness. But out of a respect that the world is beyond our grasp. By recognizing that we are fragile and limited and but temporary specks in the infinite reaches of time. You do it by relinquishing control, not because you feel powerless, but because you are powerful. Because you decide to let go of things that are beyond your control. You decide to accept that sometimes, people won’t like you, that often you will fail, that usually you have no fucking clue what you’re doing.

You lean into the fear and uncertainty, and just when you think you’re going to drown, just as you reach the bottom, it will launch you back to your salvation.

And if you’re wondering how the hell to get started, I’ve got just the thing for you: six video courses that help you find salvation in six major areas of life: purpose, relationships, emotional mastery, resilience, challenging harmful beliefs, and building a better life. To get you started, here’s the first lesson of the Finding Purpose Course that you can watch on my YouTube channel. You’re welcome.